Rev Sauca: “In war, God is always on the side of those who suffer”

Patriarch Kirill of Moscow has made further statements supporting the war in Ukraine and Russian President Vladimir Putin. His latest stand is a call to fight Moscow’s “internal and external enemies.” “May the Lord help us unite during this difficult time for our homeland, including around the ruling authorities,” he said. “It is thus that true solidarity will arise amongst our people, as will their ability to reject external and internal enemies and build a life with greater goodness, truth and love.” It was not the first time that the Patriarch of Moscow expressed support for Russia’s military plans. In fact, he has been consistently doing so since the outbreak of the conflict in Ukraine. His statements and declarations have caused a stir in the ecumenical world, with numerous requests to the World Council of Churches (WCC) to “expel” the Patriarchate of Moscow. SIR turned the question to the acting secretary general of the WCC, Rev Ioan Sauca, a priest of the Orthodox Church in Romania. 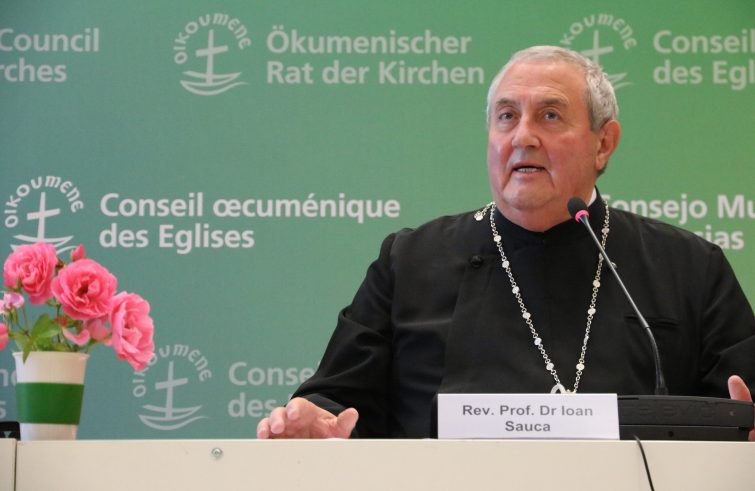 Is there a possibility that the WCC might make this decision?

“The decision to suspend a member Church from the WCC does not lie within the responsibility of the General Secretary as it is a matter to be decided by the Central Committee, our governing body.

The WCC’s Constitution clearly defines the criteria for suspension in Rule I,6:  “The central committee may suspend the membership of a church: at the church’s request; because the basis of, or the theological criteria for, membership has not been maintained by that church or; because the church has persistently neglected its responsibilities of membership. Such decision is taken by the WCC Central Committee only after serious discernment, hearings, visits and dialogue with the churches concerned and discussions.

Have there been cases of suspension or exclusion from the WCC in the past?

The WCC has been confronted with similar situations in the past. Most notable is the case of the Dutch Reformed Church in South Africa which supported apartheid, also in theological terms.

Its stance caused much controversy and resulted in condemnations by other WCC member churches. Ultimately, however, that Church opted out of the WCC because it no longer felt its membership was appropriate. Therefore, it was not the WCC that suspended or excluded it. It was, however, readmitted into the WCC since then. Similar situations occurred in the 1991 Canberra Assembly.  The Gulf War was a divisive issue during that Assembly, and the overwhelming majority of the delegates unanimously agreed that “war is neither holy nor just.” However, some opposed the appeal for an immediate and unconditional ceasefire coming primarily from the American churches and the Church of England. Theological questions therefore arose on the subject of churches supporting war. One crucial question was whether those Churches overtly supporting a war could be members of our communion. Some requested that they be excluded. Also in that case, the WCC did not adopt a radical position, nor did it decide to exclude those Churches owing to a greater motivation to continue the dialogue. In fact, a spiritual approach prevailed. The most quoted sentence in Canberra was that of the general secretary of the “Middle East Council of Churches.”

When asked which side of the war God is on, he replied: “God is on the side of those who suffer.”

Have there been any such cases involving Eastern European Patriarchates and Patriarchs?

During the war in Yugoslavia there were strong pressures to suspend membership of the Serbian Orthodox Church. Patriarch Pavle had initially expressed support for the political leaders and the majority of people that regarded the war as a legitimate way of defending national identity. However, when he realised he had slipped up in the political arena, he offered the grace of a public apology. He ran the risk of joining the large-scale anti-government protests in Belgrade and with great courage he publicly declared: “If a Great Serbia should be held by committing just a single crime, I would never accept it; … May we disappear, but disappear as humans, because then we will not disappear, we will be alive in the hands of the living God.” An exemplary shepherd, a holy man of God!

His courageous witness to the values of our Christian faith in a challenging situation might serve as guidance and inspiration for discernment today.

Father Ioan Sauca, what is your personal opinion? The Central Committee will meet again in June: which decision do you expect it will take?

I can hardly predict the decision of the upcoming Central Committee, although I expect it will be one of the most challenging issues on the agenda.

As for myself, I am in great pain, like many others, especially as an Orthodox priest. The tragic events, the tremendous suffering, death and destruction are in stark contrast with Orthodox theology and spirituality.  As known, I did my best: I condemned the Russian aggression against Ukraine, supporting the declaration of Metropolitan Onufriy who called it a “fratricidal war.” I wrote to Patriarch Kirill, I called on the two presidents to stop the war, and a WCC delegation travelled to Ukraine’s borders from Hungary and Romania to meet the refugees. We all feel hopeless, angry, frustrated, disappointed. Humanly and emotionally, we tend to take rapid, radical decisions. However, as followers of Christ, we have been entrusted with the ministry of reconciliation, and the theme of the upcoming WCC Assembly reminds us all that Christ’s love moves the whole world to reconciliation and unity. While it would be easier to speak the language of politicians, we are called to speak the language of the faith, of our faith.

Excluding, excommunicating, demonising is simple; but as WCC we are called to provide a platform for encounter, dialogue and mutual listening, even if and when we disagree. This is what the WCC has always stood for and I would suffer greatly if that vocation were to be lost, thereby changing the very nature of the WCC.

How can the WCC fully accomplish this mission while a ‘fratricidal’ war is being waged?

I believe in the power of dialogue, in the process of reconciliation. An imposed peace is not peace. For peace to be long-lasting, it must be a just peace. War can neither be just nor holy; to kill is to kill, and it must be avoided through dialogue and negotiations, by listening to the victim first and subsequently listening to the offender.

And I do believe that the offender can change, be transformed by the power of dialogue and by God’s grace, by owning up to their sins, by redressing the damage, and by progressing along the path of a just peace.

It may sound idealistic and utopian when confronted with evidence of war crimes, but the Holy Scriptures and our history offer us many such examples. To conclude: I will continue to speak out against all aggressions, invasions and wars; I will continue to be forward-looking, and I will do my best to ensure that the WCC remains true to its mission of ensuring that dialogue remains an open door.

If we exclude those we do not like or agree with, with whom shall we talk? How could we progress in the direction of reconciliation and lasting and just peace?

Alongside the ongoing military conflict, there is also an ongoing ‘conflict’ involving the Orthodox Churches. What does the WCC intend to do in order to avert rifts?

The World Council of Churches seeks to encourage its member churches to address their disagreements and divisions through mutual prayer, theological dialogue and through joint efforts whenever and wherever possible. Although the WCC has no legal authority over its member churches, it does create ecumenical forums where they can tackle divisive issues if they so wish. The various ecumenical forums created over time by the World Council of Churches have contributed to building bridges and mutual trust between Orthodox churches that had grown estranged from each other as a result of historical circumstances.

It is being claimed by many that ‘ecumenism is dead’ because the Orthodox Churches are unable to talk to each other. To what extent does war affect the ecumenical dialogue between the Churches?

I disagree with the claim that ecumenism is ‘dead’ because some of the Orthodox churches have been unable to talk to each other. The Orthodox family is not the first and only one facing internal tensions and divisions today.

Disagreements between two Churches, however serious they may be, will by no means be fatal to the ecumenical movement.

The quest for Christian unity stems from the confession that the Church of Christ is one, notwithstanding our human divisions. We are committed to furthering the ecumenical movement not because it is yielding many results, but because it is a Gospel mandate. I therefore do not perceive our times as marking the “death of ecumenism.” I would rather say that the WCC is more relevant and important than ever before. It remains the only free arena that brings together Churches from all over the world, to engage in dialogue and friendship together. Had we not had the WCC today we would have to create it. Indeed, it is the only path leading to reconciliation and unity.