Card. Dziwisz: “The assassination attempt on Pope Wojtyla for defending the cause of the oppressed”

Cardinal Stanisław Dziwisz, speaking against the backdrop of the ongoing pandemic of Covid-19, recalled that “John Paul II’s life was marked by suffering from the very beginning, but he always said that suffering has meaning.” On May 13, the Archbishop Emeritus of Krakow, former Private Secretary of John Paul II, celebrated Holy Mass commemorating the 40th anniversary of the assassination attempt on the Pope by Mehmet Ali Agca in St Peter’s Square. The service was held in the Vatican Chapel of St. Sebastian within St. Peter’s Basilica, before the tomb of the Polish Pope. Contacted by SIR, Cardinal Dziwisz – who personally witnessed the attack – shares his thoughts on that “unimaginable” event, when “the fear for the life” of Karol Wojtyla “was imbued with the hope that God would save him”. 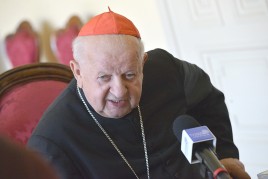 It is widely assumed that John Paul II knew who orchestrated the attempted murder. Is it true that the Pope knew who ordered Ali Agca to kill him?

The Holy Father consistently dismissed speculation about the instigators of the assassination attempt. I think he had an inkling of who they were, but he was unwilling to discuss it further. There are various versions as to why the Holy Father was attacked, many hypotheses, suppositions, more or less likely explanations.

The trial of Ali Agca and the investigations conducted by numerous experts have not shed light on the identity of the instigators.

The whole truth on the attack is very complex, and I doubt whether it will ever be established. The Holy Father paid with his own blood for his commitment to the pursuit of historical justice and the freedom of peoples.

Your Eminence, in your opinion, why did someone want to kill the Pope?

Some saw the figure of John Paul II as a problem. The Pope clearly stated that the communist system, like every totalitarian regime, is an enemy of humanity and peoples, that it clamps down on freedom, dignity and on every aspiration for justice and peace. Since the beginning of his pontificate, John Paul II championed the cause of those who were stripped of their voices, the poor, those persecuted by totalitarian regimes, and the oppressed. This was something that the architects of totalitarian regimes were unlikely to appreciate. The forces of evil do not engage in dialogue with respect for their opponent. They resort to violence.

Was it possible to envisage that someone would try to kill the Pope?

An assassination attempt on the Pope was utterly inconceivable. John Paul II was shot in the abdomen, the right elbow and the index finger of his left hand. After the shots he collapsed in my arms. He was in great pain.

Still, the fear for his life was imbued with the hope that God would save him. It was a race against time.

The Pope remained conscious and prayed as best he could with a faint voice. I heard him offer his suffering for the Church, and I also heard his words of forgiveness for the attacker. He lost consciousness when we reached the Agostino Gemelli Hospital.

The third secret of Fatima, written in 1944 by Sister Lucia, one of the Fatima visionaries, and disclosed by John Paul II in 2000, describes a Holy Father as having been “killed by a group of soldiers who fired several shots and arrows at him.” Did the Pope know the content  of the Fatima message, the so-called secrets of Fatima, before the attack?

The Holy Father said that he only started to learn of the message of Fatima when he was convalescing in hospital.  Msgr. Pavol Hnilica, for many years a victim of persecution by the communist regime in Czechoslovakia, submitted documentation on the Fatima revelations to the Pope after the assassination attempt. John Paul II was shocked by the contents of the documents. When the Pope left the hospital, Bishop Hnilica had the statue of Our Lady of Fatima brought to Castel Gandolfo where it was placed on display on the anniversary of the revelations in St Peter’s Square on May 13th, the date of the assassination attempt. A year later, John Paul II went on pilgrimage to Fatima, where he entrusted the whole world, including Russia, to the Immaculate Heart of Mary. It was the Pope’s wish that one of the bullets that had been fired at him be inserted into Our Lady’s crown. John Paul II often said: “I myself experienced the protection of the Mother of God” on that dramatic May 13th.